Fly-tippers blocked a road near Old Winchester Hill over the weekend.

The mess was reported on the free ClearWaste.com fly-tipping reporting app by a cyclist who wrote: “Over Old Winchester Hill, pretty poor visibility but a lovely ride, sadly spoiled when we came across #flytipping. Why do some think it OK to trash our countryside?” 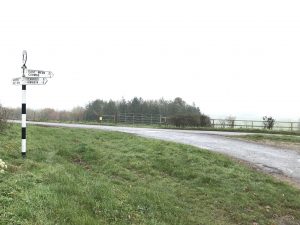 “People who fly-tip are a disgrace,” said local entrepreneur Martin Montague, creator of the ClearWaste website and app. “Tougher action is needed to combat fly-tipping – including the siezing of any vehicles used for this criminarility.”

Last year there were more than one million incidents of fly-tipping in England, at a cost to taxpayers of more than £100 million.

Note: The people in the picture were not involved in the fly-tipping – those in the distance were helping a farmer clear a fallen tree.