Hampshire Police have been accused of providing thieves with a “How-to” guide to steal motorbikes by admitting they won’t tackle them.

Police told followers on Facebook that they “do not currently pursue motorcycles for a multitude of reasons.”

Writing on the Southampton Cops Facebook page on Saturday they said: “The main one reason being that by us pursuing these riders, their actions and driving becomes a lot more dangerous and reckless, placing not only themselves at a higher risk, but also the general public.”

They added: “Hampshire Police will follow up with these thefts and assess whether the evidence and crime itself is proportionate with further investigation.”

Victims of thefts and members of the public reacted with fury to the post. Anna McLeish said: “For goodness sake. This is basically a ‘how-to’ guide for committing crime, either for stealing someone’s motorcycle or using them as a getaway vehicle!”

Another, Nathan Bellows, said: “Proof from the police themselves, if ever we needed it, that the police in Southampton literally do not pay one bit of attention to stolen motorcycles or crimes committed using a motorcycle.”

Phil Allen said: “This is a charter to support criminals. To actually put in print the fact that you are going to do very very little to try and catch criminals is a dereliction of the duty you should provide to citizens.”

Terry Stanton said: “So you have basically just told everybody that you won’t investigate motorcycle crime, to safe any further confusion Please deactivate your Facebook account so you can’t give the criminals any more advice or you might unwittingly become an accessory to their crime!”

David Johns said: “What a pathetic post, really embarrassing. So basically they can ride about on a stolen motorcycle and you will do nothing. If anyone reports a theft you will assess if it’s worth bothering to investigate…and then do nothing. These low-lifes are laughing at you. Really, if this is what you have to update us with I would stay quiet.”

Another contrasted the police’s attitude to thieves with that towards people accused of breaking lockdown rules.

Chris Stevens wrote: “Judging by videos I’ve been seeing recently, you’d rather spend your important policing time in parks etc. Arresting the public for being out exercising more than once per day.”

Paul Keelan said: “Hampshire police do not follow up any crime unless people are breaking COVID rules. When do we ever see police on the streets unless it’s a lockdown?”

Motorcycle theft is a serious problem. According to figures gained by a Freedom of Information (FOI) request by the Motorcycle Action Group (MAG) one in every 46 registered motorcycles was stolen in 2019.

“The reason for this post is that we provide the public with transparency. Committing bike theft is not a free for all. It is still investigated. If your case is filed, it is most likely due to not having a suspect identified. I understand that in some cases, there is a named suspect, but there are reasons that we cannot pursue this.

“If you would like a reason to why your case is not identified, submit an online report, referencing the number given to you. Then ask the reason why this is not being investigated or the progress of the investigation.” 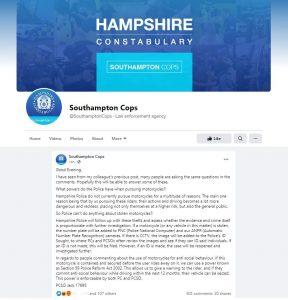