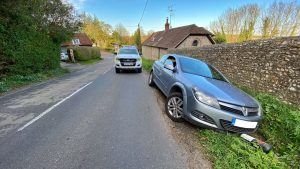 A man was been arrested by police for drink-driving following an accident in Droxford this evening.

The driver fled the scene but following a search with police dogs they were arrested.

Police tweeted: “The driver made off from the scene leaving his car in a ditch. After a search they were arrested on suspicion of drink driving. #StayAtHome.” Photo: Hampshire Police