These are the faces of the two men found guilty of murdering Gurinderjit Rai in the Corhampton case.

Gurinderjit, also known as G, was found dead in a car parked in a rural layby in Shepherds Farm Lane on Saturday July 13th 2019. The 41-year-old had been shot at close range the previous night and had died from his injuries.

The jury found two other men, Paul White, 27, (below left) of Dyson Drive, Winchester and Corin Barlow, 41, (below right) of no fixed abode, guilty of manslaughter. 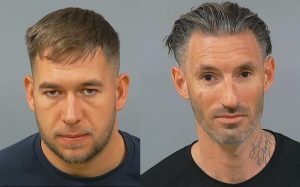 The four men have been remanded in custody to be sentenced on Friday April 23rd.

The jury found a fifth man, Philip Hodan, 43, of Longwood Dean Lane, Owslebury, not guilty of participating in the criminal activities of an organised crime group.

The eight-week trial heard that Hannis was a drugs dealer and was in considerable debt to his supplier, Gurinderjit Rai.

On the night of Friday July 12th, Gurinderjit was lured to the layby in Corhampton to collect debt money from Hannis.

The jury heard that Hannis and Statham travelled to the layby in a recently acquired Mercedes where they met with Gurinderjit and shot him twice whilst he sat in his car.

The car was later found burnt out nearby. The shotgun was later recovered from woods in Whitchurch.

Speaking after the hearing, Detective Chief Inspector Dave Storey said: “Gurinderjit Rai’s death was a carefully planned assassination in which the jury found Hannis and Statham had principal roles.

“Ultimately this is another example of the harm, misery and devastation that drug supply and its associated violence can inflict upon communities.

“Our thoughts remain with Gurinderjit’s friends and family.

“The investigation into Gurinderjit’s death was long and complex and I would like to thank all those involved for working tirelessly to bring these men to justice.”

Anthony Johns, CPS Wessex Senior Crown Prosecutor, said: “The CPS and the police worked closely together to build a strong case from the outset. The scale and complexity of the evidence collected was substantial.

“The meticulous review of witness evidence, mobile phone data, reports from experts in various fields and other prosecution materials took many months. This careful examination and preparation meant that we were able to present a compelling case to the Court.”